A few weeks back, we brought up the chart of AEM as being at an interesting trade position. 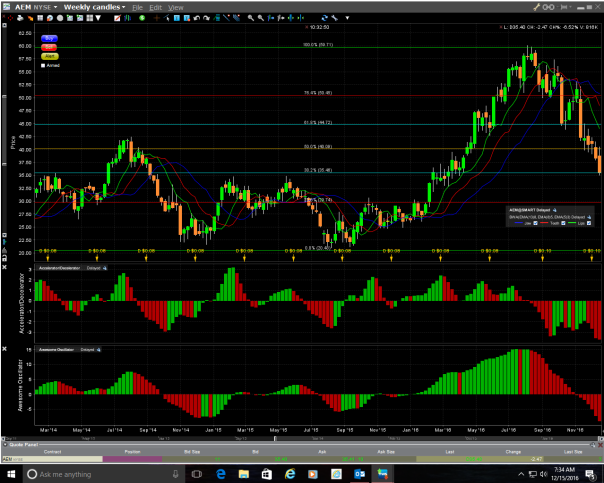 After  a run-up in the price of Gold this year, the metal has experienced a steady downdrift, retracing much of the year’s gains.   AEM has tracked  similar price action.  As shown in the above chart, the price of AEM has fallen to the optimal level of an approximately 62% retracement of the advance from the low this year, helped in large part by the sharp $35 dollar sell off in the actual Gold futures today.

Gold is mired in a bear market and is likely to remain that way as long as:  a) inflation is not imminent and b) the US dollar remains strong.  The most recent small uptick by the Federal Reserve bank has sent a signal that this scenario will continue.   It does appear that there was some panic selling in the gold market which leads us to this possible inflection point for AEM.  As discussed earlier, the $35 dollar price is at a favorable risk/reward point for a long regression to the mean trade.  While the oscillators do not give any hints of an imminent momentum change, a weekly close that is not right at the bottom of this week’s activity will be a positive sign that a tradable bounce is at hand.

This is a regression trade only and not a predictor of a new trend.  If the trade does not bounce by next week, then the bear pressure is overwhelming and we will abandon the trade.