A new year.  A new line in the sand from which to start the arbitrary measurement of life’s progress. We can’t provide any insight on weight targets or love and relationships, but we will give a forecast for the Dow 30 stocks.  More correctly, we will give expectations of the Dow components based on the existing weekly chart patterns for the next 4 to 6 months.  Our tactic is to observe the progress of the components against our expectations over the course of the year and make adjustments if needed.

We view the weekly charts of the Dow components via the filter of about 6 indicators which we favor including chart patterns, Elliot wave assumptions, support/resistance areas, accumulation measures, (in particular the SCTR statistic created by Stockcharts.com), Point and Figure charts and relative strength vs the S&P.  We won’t cite the statistics for each chart but readers can contact the writer for more details if interested.  At the end of the analysis is a conclusion of what is expected given what is known.  If price thresholds change to alter those outlooks, we will alter our views if warranted.

If someone discovers a cure for death, we’ll try to be in on the trend. Meanwhile, here’s our outlook:

1.       3M or MMM. $178.57 Appears to be trading in an ascending triangle formation which is constructive. SCTR rating is middling at 51 indicating no urgency on the part of buyers.  The PNF chart shows a threshold of 182 for a breakout which would move MMM to a more aggressive buy.  Relative strength shows as a market performer.  Upside target is 200, but a break of the 165 area of the uptrend line would cast doubt on the move. Expected to track the market.

2.       American Express, AXP $74.08  Appears to be trading in an ascending double bottom pattern.  SCTR reads at 81 suggesting steady accumulation although there is considerable congestion at the $76 area.  AXP’s recent price run-up has made it an outperformer of the S&P.  We expect that AXP will stall here.

3.       Apple, AAPL  $115.82  Appears to be ready to resume its decade long uptrend after a mostly sideways 2016 trading range. We can see a possible ascending triangle on the weekly chart and the SCTR rating is at 76, though plateauing.  There is a double top breakout possibility at $120 on the PNF charts, so will be vigilant for that. The stock trades as a market performer to the S&P.  Preliminary target, $130.  A close below $90 signals a drastic change in outlook.

4.       Boeing, BA.  $155.68. Trading in a strong up channel after making a low near $100 in 2016. The SCTR statistic is at 82, still strong but the price distance above our moving averages in such a short term tempers any upside expectation. While the trend is strong, I expect that a better buying opportunity can be had after a period of consolidation.

6.       Chevron, CVX, $117.7  A strong performer throughout 2016, looks to be in a narrow up channel. SCTR at 79 shows good buying support even with the price increase. The PNF chart shows a long pole up and the price is considerably above our favoured moving averages which tells me that a consolidation of price is likely before any continued advance.  I expect price to stall here.

7.       Cisco, CSCO, $30.22  A steady but sneaky advance all year culminated with a flattish close.  Despite this, the long term chart shows a piercing of long term resistance and this is now support.  Statistics are mixed on this chart as the SCTR at 47 is only middling and it has underperformed relative to the S&P.   The PNF chart does show a recent triple top breakout however which puts us in the bullish camp.  The chart price looks constructive despite the middling accumulation statistics.  I expect a target of $36.

8.       Coca Cola, KO, $41.46  This stock has been trading in a down channel for most of last year and there’s little that I can see that would change that direction.  The SCTR stat is awful at 24 and the PNF chart recently gave a double bottom sell. The relative strength has been below the S&P all year so there’s no hint of any turn.  Accordingly, we have no reason to be long the stock.  In fact, the monthly chart, (not shown) indicates a divergence in momentum at recent highs, so if anything,  a rally to the $43 to $44 area would cause me to want to be short.

9.       Disney, DIS, $104.22  Disney managed to negate a potentially very bearish double top pattern by moving sideways through most of 2016.  Accordingly, a potentially bullish cup and handle formation looks to be developing which portends a move to a new high.  The SCTR statistic is at 62 and climbing which hints at accumulation while the PNF chart shows a recent breakout. While the move in recent weeks has been strong, we expect more after a possible consolidation. Target is $120

10.   Dupont, DD, $73.4  This stock traced a steady advance throughout last year and accordingly, our statistics look favorable on it.  The SCTR is at 67 and there was a recent breakout in the PNF charts.  On balance, with price bumping against all time highs and far from moving averages, I’m inclined to be neutral on this stock because of the cross currents on our indicators. 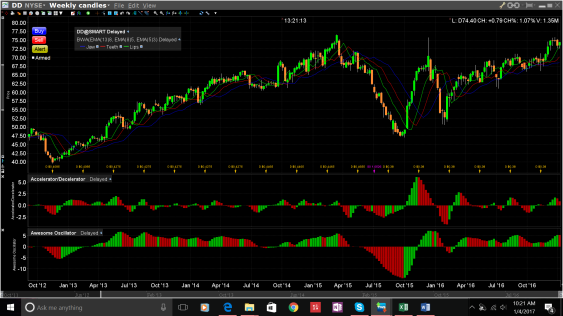