There’s an old Chinese saying which is actually a curse and it goes, “may you live in interesting times”.  Related to that is “be careful what you wish for” warning.  These sentiments come to mind upon viewing the aftermath of the US elections.

Our read was correct on market expectations and subsequent activity…we just didn’t expect it all to happen in one day!  Markets have classically been accepted as a discounting mechanism for all news, but at critical points of uncertainty, they can be wildly emotional and irrational.  The basis of technical analysis is that human emotions don’t change over time and hence technical studies are behavioral studies.

Shown below are the movements of the 3 major ETF’s in the aftermath of the election representing the Nasdaq, the S and P and the Dow. 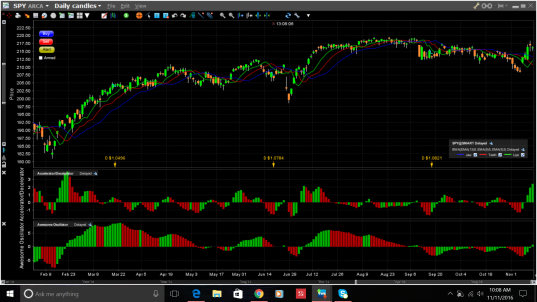 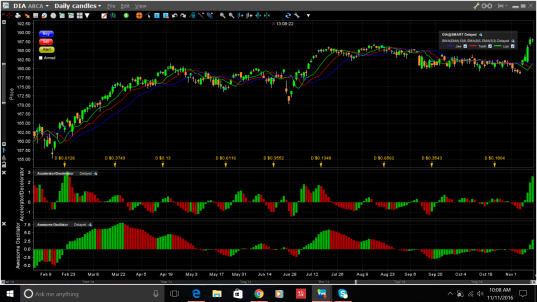 In fact, none of these charts reflects the panic and hysteria which ensued in the evening trading sessions when it first became clear that Trump would prevail.  At the extreme, markets all hit their 5% limits as the wrong bets panicked to sell their positions.  By the time markets opened the next day, sobriety resumed and by the end of that same trading day, all markets closed at their highs.  Fear, greed, complacency, disappointment, panic and euphoria, all the features that make markets fun and challenging concentrated in a very short time window. This is the best reality show going.

Now as the dust settles, we attempt to soberly assess the collective actions of the market participants.  Few know precisely what policies will have impact on which market sectors but certainly a few in focus would include energy, health care and financial stocks given the President-elect’s rhetoric during the campaign.

An observation we can make by comparing the relative performance of the 3 indices shown by the charts above is that the Dow 30 industrial averages outperformed the other broader indices and managed to hit new highs.  The QQQ ETF, while also rebounding sharply did not make a new high, nor did the SPY.  This makes some sense since the Dow is composed of notional ‘industrial’ stocks that are more brick and mortar than their QQQ or SPY constituencies that house more momentum type issues.

It’s quite possible that the new administration’s policies will positively affect the markets longer term since it will be a business friendly administration. The fact that the incoming President is a businessman and not a lawyer has to be a positive thing.  In the short term, the issue of valuation remains an issue even as it did before the election process began.  We can see some of the market highfliers have stealthily inched lower even as the markets’ overall moves have masked them. We have mentioned TSLA and LULU in the past and continue to be skeptical on their valuations.  We mentioned AMZN as being in a potentially vulnerable position.

The biggest factor will be the direction of interest rates, the main support of the markets’ long term buoyancy.  Bond markets have already moved in anticipation of a less benign environment there and debt investors are less prone to the ebullience of equity investors.

From a purely technical perspective, we don’t see that the risk reward scenario is favorable to be heavily long the markets in the intermediate 4 to 6 month term. The divergences in momentum discussed previously still exist among the major indices and for this to dissipate, the indices would have to tread water again for another 6 months.   In our Nov 1 commentary, we expressed that we didn’t see significant structural weakness, but if the stock market can advance meaningfully from here, it would be like expecting a long distance runner to sprint the last mile.  Notwithstanding the activity of the post election action, we remain neutral to bearish on the indices as a whole and will continue to isolate issues at interesting junctures.