It’s hard to believe that we are fully 3 months past the contentious US general election. The verdict is in and it’s been all good for the markets, save the speed dip immediately after the generally surprising result.  Despite the ability of all markets to ratchet higher, there is still plenty of skepticism from many market pundits that things can continue to be so benign.  While not outright bearish, even we’ve been cautious. We pointed out a number of small clues that were emerging indicating momentum was beginning to flag and that this could be hinting at weakness to come.

Those technical concerns were overcome and our tepid enthusiasm  had to give way to more positive views  as markets continue to push into new high territory after a brief congestion period.  What’s most interesting is not just that markets continue to advance; even more compelling is that internal measures of market strength continue to remain robust.  When statistics such as new highs versus new lows continues to be lopsided in favor of new highs, when advances over declines are supportive of market direction,  when price versus moving averages are generally positive, there is little upon which to hang a bearish hat.

If anything, market strength continues to broaden.  While early market leaders such as technology and financials remain strong, we are beginning to see more basic materials companies show up on momentum and accumulation scans.  We note for example that such companies as X, ARNC and FCX are leading other stocks within their group into attractive chart positions.  While we can’t ignore the enthusiasm shown in the base metals and materials sector, some perspective is in order.   Many of these issues are recovering from deeply discounted prices and are just now bumping into long term supply.

Another company in the base metals space is TECK, also having benefited from the rising tide in this group.  The monthly chart shown below shows the advance TECK has made but we note that it approaches old areas of resistance. 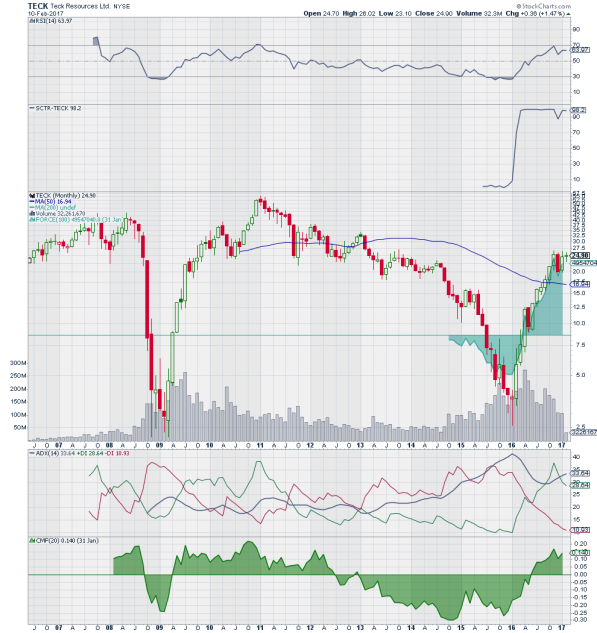 The persistently strong accumulation statistics points to continued strength however.  In the case of Teck, the move from the lows has exceeded the 50 period moving average indicating a change in the big trend.  Accordingly we expect a test of the $35 area as the next objective.

The early signs of any direction change in the overall markets will be shown by deterioration in the market internal statistics mentioned earlier.  In addition, ROC indicators of trends will also be closely monitored week to week.  Otherwise, the tide of least resistance is up.