Earlier this year, we made some observations about some large cap market leaders.  One of those leaders was Amazon and the opinion we offered at the time was that momentum seemed to be flagging and we expressed that the high had probably been made. 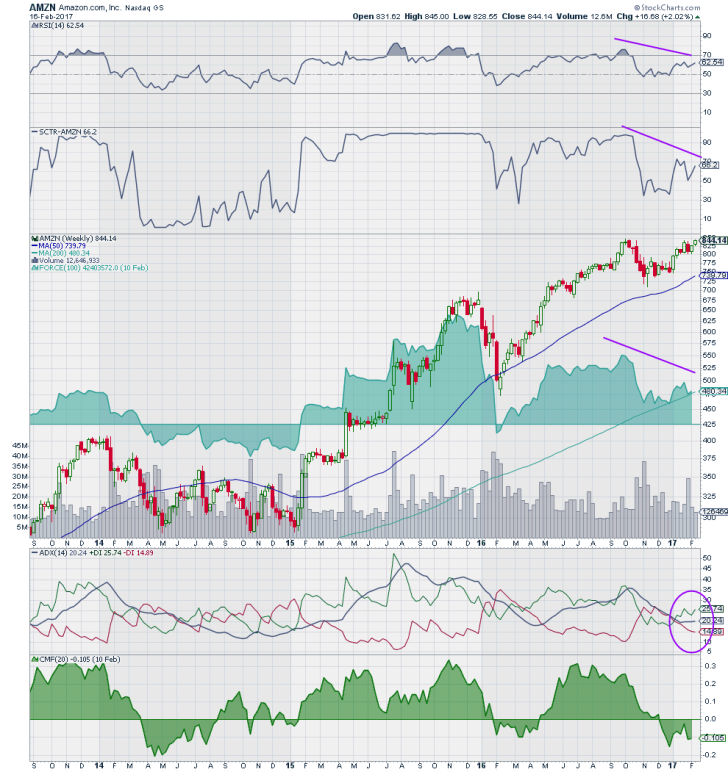 After a brief selloff, our skepticism was unrealized and AMZN has gone on to match its all time high price. As we re-visit the chart again, there are still conflicting signals which we have annotated in the chart above.  The purple colored trend lines drawn on the various indicators show a conspicuous divergence from price activity.  For us, this is still a caution sign and despite the price move, we’re not inclined to chase the new highs.

On the other hand the area shown by the purple ellipse on the DMI indicator is pointing to a nascent new up trend move.  Since this is the only one of the indicators we follow that can be considered positive, we’d be inclined to stick with the majority of the other indicators that express caution.

Another stock that we reviewed was V, or Visa, a Dow component.  At the time in early January, momentum wasn’t looking too positive for this issue and we expressed that at the captioned area of the chart below:

Boy, that was a bad call.  V went on to surge past old resistance and move to powerful new highs!  This advance mirrored the gains seen in most stocks in the financial and banking sectors which have been among the strongest in this recent market advance.  As prices turned, indicators also confirmed the move, so the negative bias was completely eradicated.

But we bring up the price action of V to illustrate two significant trading principles…not just that forecasts can be wrong.  The first big principle is, always use stops. Regardless of how certain one may be about a price direction, there must always be an ‘airbag’ which says that the outlook is wrong.  Fighting a tape is the surest way to lose money on investing.

The second insight which we wish to point out is also extremely valuable.  When a chart pattern exhibits all of the characteristics of either a bullish or bearish move imminently ahead, that means that knowledgeable people have money at work in the markets in anticipation of said move.  When something changes to affect that outlook, all of the money that is caught the wrong way will exit and may go the other way!  When that happens, the move in the opposite direction can be sharp and extreme. Both of these principles underline the most important investing credo;  don’t fight the tape.