While not appearing in headlines every day in the financial press, big pharmaceutical and healthcare stocks have been advancing, if unevenly along with the general buoyancy of the overall markets.  The chart of Eli Lilly shown below is an example of the building bullish patterns on many of the classic big pharma stocks including Merck, Pfizer and in the biotech space, AMGN. 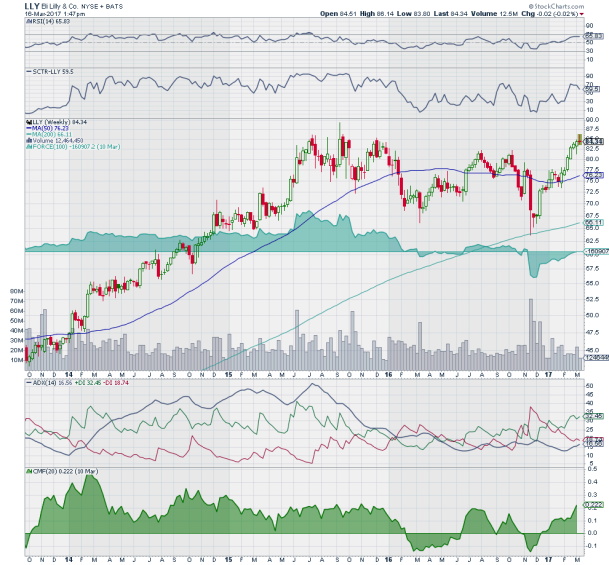 A lesser known stock, which has a strong drug portfolio and steady record of dividend increases is also very compelling.  The most compelling factor is that the chart pattern also exhibits the hints of a large move ahead.  Shown below is a chart of ABBV, the company which produces Humira, a medication which treats conditions such as rheumatoid arthritis. 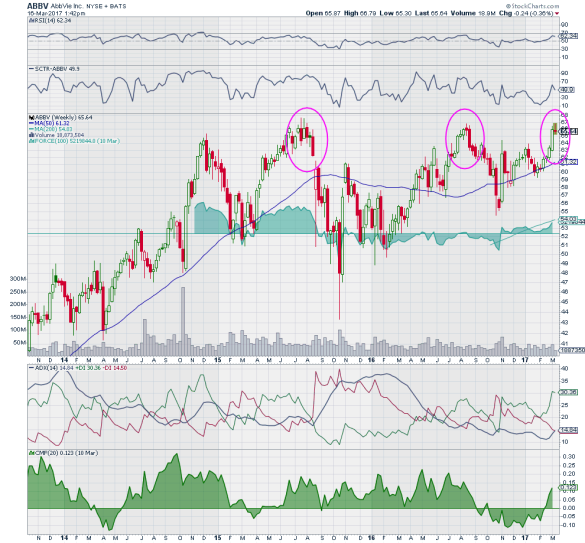 Recent price action shows the third attempt at breaching a new high at about the same historical level at the 65-66 area.  Point and figure charts also show a recent move through congestion and move over 67-68 would be a clear breakout.  Given the underlying fundamental strength of the company as shown by the increasing dividend rate and the strong price action forming a bullish ascending triangle, we are alert to taking a position in ABBV in anticipation of an eventual breakout.  Notwithstanding a candle which hints at a pullback at the resistance area, we note there were 6 consecutive weeks of advance prior to this bar, strong hints of accumulation.  Our opinion is that a pullback is a buying opportunity all the way down to the 61-62 area.