We all know that the equity markets have been steadily climbing since the US elections last November.  There have been some dramatic pullbacks, but the unmistakable trend has been for higher prices.  As we know, markets are not monolithic and within the aggregate market moves, there have been winners and losers.  Energy has been the conspicuous loser while a handful of technology stocks, clustered around the popularly labelled FANG stocks have captured daily headlines as being the winners.

But it would be a mistake to characterize the advance of the FANG group as being the rise of technology stocks.  What they really represent are companies that facilitate consumption.  Many of the stellar stock issues advancing over the past bull phase are about efficient ways of distributing goods, services or information and not really so much about raw technology.  There is an ongoing remaking of the commercial landscape in the American retail industry.  Whereas Wal-Mart and Costco were innovative when they first radically changed the retail landscape a generation ago, now Amazon is pushing in with their model of distribution and sales.   Markets are making collective bets on the future of new innovation.  It’s not a coincidence that even as Amazon surges, Sears is on the verge of extinction.

Lost among the headlines created by the ratcheting tech stocks however is movement in a sector that has also been quite bullish for over a year; health care.

In this table (from stockcharts.com) we can clearly see that over the past year, the bullish percent readings for healthcare actually exceed those of the technology sector.

While technology companies may facilitate discretionary consumer spending, health care industries will benefit from the simple fact of a growing and persistent demand dynamic that is not discretionary; ie; people age and they get sick.   We made reference to the breakout in HCA earlier this year above the 84 area, although it has since proved disappointing. Still, the longer term chart looks constructive in this issue and we remain bullish on it.  We also introduced ABBV as having a very constructive chart which reflects their underlying product lines and efficient operations.  We remain very optimistic on ABBV as it continues to make new highs.  Among the big cap pharmas, we like LLY and expect that a protracted advance is ahead.

There are numerous smaller issues in the bio tech and bio pharma spaces which are also interesting but which carry significantly more risk because of burn rates and ‘all or nothing’ nature of their research, so isolating winners can be challenging.  A slightly less risky way for exposure to this space is to invest in AMGN, the largest bio-tech concern.  A much more aggressive way is to invest in LABU, which is a 3x directional ETF of biotechs.  This chart, while long term attractive is very volatile and for aggressive traders only. 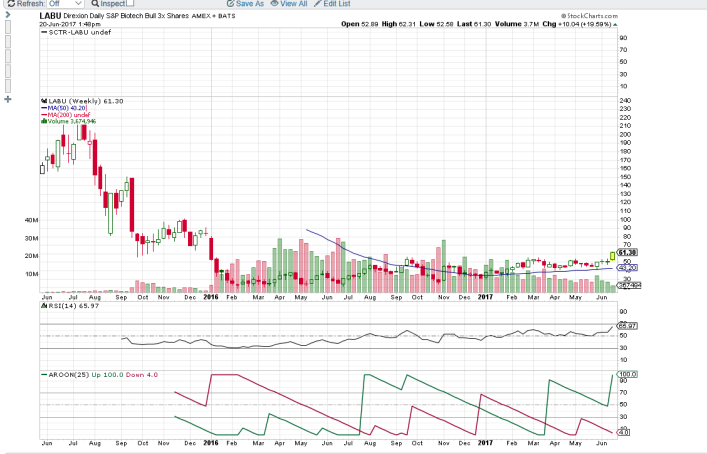