Outside of the activity of the listed markets is a phenomenon that has captured the attention of money people everywhere.  We are referring to the crypto currency space as represented by the more well known products, Bitcoin and Etheruem.  Bitcoin prices, which  began at just a few hundred US dollars just over a year ago, managed to spike to over $4000 just in the past month. This kind of price activity will attract investment activity and so there are numerous other crypto currencies available for investment as well.

Interestingly, over the past year, unsettling political news which would normally send money scurrying to the safe haven of gold, has instead boosted the price of  crypto currencies.   This is truly the wild west of investing as there is no standardized mechanism for trading and price transparency is iffy.  Some nations such as China have outlawed the creation of new crypto currencies and it’s a matter of time before the regulatory nannies try to impose rules upon this new product.  Below is a chart of a very thinly traded ETF that tracks the ebbs and flows of Bitcoin. 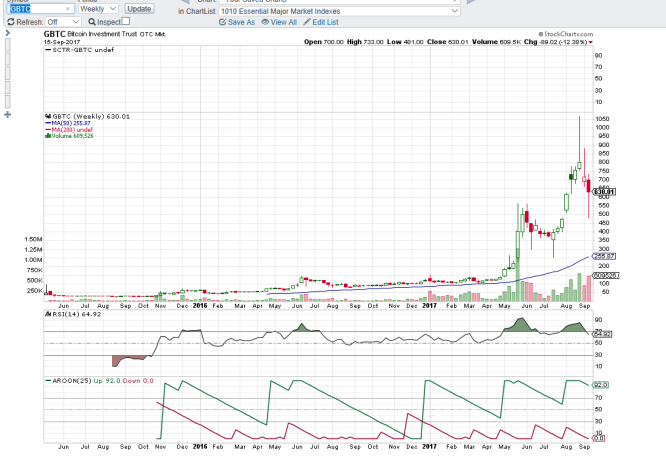 As we can see, it’s not for the faint of heart nor shallow of pocket.

The technical and philosophical merits of these products can be discussed separately and we will entertain this discussion if sufficient interest arises.  But since this a technical analysis discussion, the real interest for us is how to be involved in the blockchain protocol space, the underlying framework for products such as bitcoins. We expect that this will grow to encompass much of the finance and banking industry in the years to come and is definitely not a fad.  An interesting article on blockchain and one of its most knowledgeable individuals can be read here.

In the meantime, our intent is to look at the companies that will likely be substantial players in this new paradigm for the financial industry.  We had speculated that massive amounts of networked computer power would be necessary to allow for the implementation of instantaneous debit/credit settlements.  For this reason, we had targeted 4 companies earlier last year that would be likely players in this space.  They were, VM Ware (VMW), Intel (INTC), Cisco (CSCO) and IBM.

Since our comments last year, IBM has performed indifferently, CSCO  and INTC have been coiling and in fact, INTC looks about to break out to the upside after a long consolidation, but VMW has been steadily ratcheting up from the 65 area to the present area near 110. 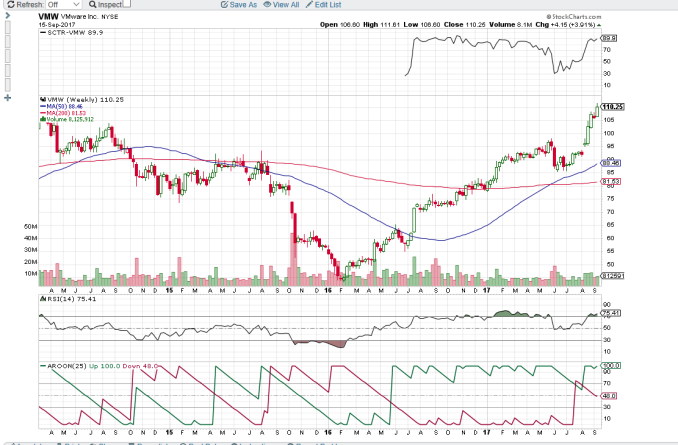 While this stock has almost doubled since our first entry, there is still no indication from our statistics that may indicate that the run is over.  At 110, the price is substantially above the 50 and 200 period moving averages so some sideways consolidation may be expected and in fact welcome for those wanting to add to positions.  We don’t think the run is over and would look for retracements to add to longs.