On the recent market decline, many high quality names were thrown out by investors like rotten apples at Whole Foods.  A somewhat surprising name among them is IBM.  While the chart of IBM was hardly dynamic in the weeks prior to the market’s correction, the heavy and continued selling indicates that lots of big money, long term holders had bailed on the issue.

If we view the chart of IBM from a longer term perspective, we can see that IBM has some historical support near the 105 area, once significant resistance.

The decline to the 115 area recently brought the issue close to this long term area of accumulation.  Certainly the stock doesn’t look exactly sexy, but if we scroll the time frame to the weekly and daily windows, a more interesting set of patterns emerges. Consider the weekly chart:

The 2 last weekly bars are hinting at climactic selling indicated by the formation of a possible Harami candle setup, classically a reversal pattern.  This is especially interesting since it occurs near long term support for IBM.  Scrolling down to the daily chart indicates some more evidence of a climactic sell and a subsequent buying opportunity. 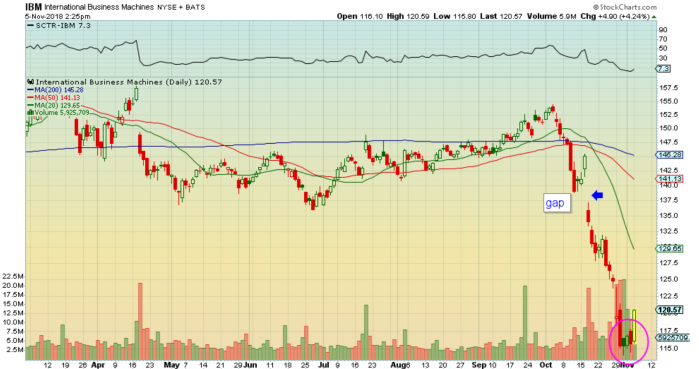 While this is not in keeping with the general philosophy of buying strong relative strength issues, the activity in IBM presents an opportunity for a regression trade which can happen fairly quickly. The target is the gap above near the 140 area and the stop would be a new low.

One thought on “IBM, Babies And Bathwater”