Much has happened in a very short time. The recent activity in the equity markets showed the flip side of the benign environment that has existed for almost 2 years since November of 2016. We’ll leave it to TV market pundits to explain stock market swings ex post facto, but we can make one glaring observation.  The beginning of the rapid advance was in the aftermath of the surprise 2016 election of Donald Trump.  The latest rapid selloff coincides with the looming reality of a Democratic led House after the most recent elections..  Certainly we can find other compelling reasons as well, chief among them the steady uptick in interest rates as directed by the Federal Reserve Bank, but political policies do move stock markets.

There are issues of valuation, of algorithm driven trading, of trade dispute issues and so on.  All are interesting in a forensic way.  Apart from the change in the aforementioned interest rate environment, the concentration of market activity into fewer hands is certainly a significant factor in volatility.  As we know, very large pools of money direct activity in stock markets ranging from equity fund companies, to index fund firms to trading operations with very sophisticated trading tools not available to individuals.

While each will have (or claim to have) their own specific style, the reality is that most are trend followers employing some variation of being fully invested in the prevailing trend.  Not doing so in the last few years would have resulted in badly lagging performance relative to the peer group.  We can argue that momentum has been more of a driver for market returns than valuation.  As the momentum stalled, the same pile of money all looks to exit at the same time.  While no one wanted to miss the rally, certainly nobody wanted to be the last one out either.

Consequently, we’ve seen the valuations of most of the heretofore market darlings, notably the FAANG stocks,  severely slashed in a very short time.  Perceptions change much faster than actual valuations.  We can certainly look back at the price action of many of the issues and note that momentum had been slowing as indicated by divergences in various indicators.  It is almost impossible to know the extent of a decline once it begins however.

The nature of the large fund activity these days means that glaring discrepancies will appear when markets are in turmoil.  While it’s true that the majority of stocks will advance in a bull market and decline in a bear market, the massive selling pressure we’ve observed recently will create opportunities in issues that are dragged down purely for market dynamic reasons rather than company specific reasons.  As we wait for the dust to settle we can observe how some of these issues react to continued volatility.

We will consider two issues that may present 2 different opportunities; Apple Computer and IBM respectively.

Apple has been one of the stars of the market’s advance rising from near the 100 level to reach over 230 at its peak.  Recent selling has taken AAPL to the mid 140’s.  It has been one of the main drivers of the Dow Jones index.  It has been correct to buy on every dip for the past 2 years until its recent swoon. If we look at the longer term chart coupled with a PPO indicator, we can make an interesting observation:

We can see that although AAPL has been in a strong uptrend, the PPO oscillator has not been trending up as much as the stock price.   While this is not bearish per se, it gives pause as to the longer term momentum.  As a comparison, let’s look at the monthly chart of the Dow Industrial index: 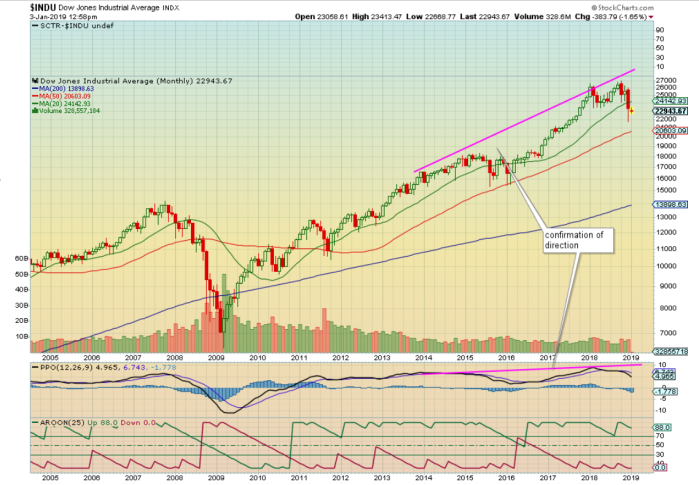 In this instance we can note that both price and the indicator are sloping in the same direction which shows that the Dow Jones chart is not exhibiting a longer term decline of momentum as appears to be the case in AAPL.  While both charts look like there may be some more settling ahead, the AAPL chart is diverging from the Dow chart.  What this means that any rallies in AAPL will be against the trend of longer term momentum.

Let’s look at IBM, the subject of a previous comment.  Before the big selloff in December, we speculated that IBM was near a long term support at the 105 area.  Accordingly, at 115, the risk was defined.  As the overall market declined, sure enough, IBM sold off as well, but right to the 105 major support area.  From that low point, the stock has rebounded a bit back to the 115 area.  More importantly we can see that the same PPO oscillator is showing a bullish divergence, not making a new low when the stock spiked down to 105. 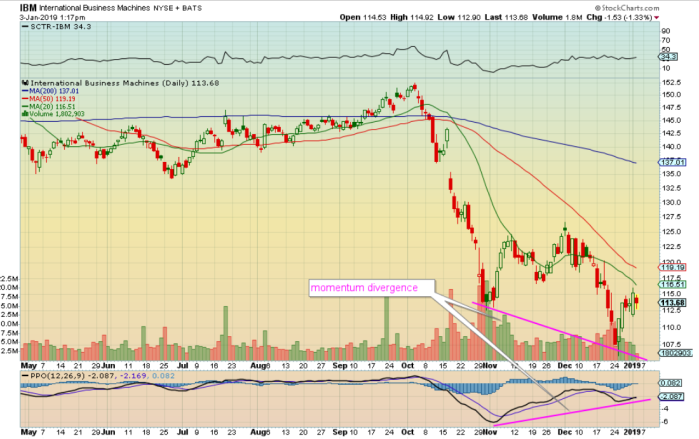 While this is not definitive proof of a bottom, this type of price/indicator action is a hint that a change in market action is at hand.  We employ other trading tools to fine tune entry, but we would be inclined to be long the stock here with a stop at a new low. The tone of the overall market is very negative, but if IBM holds here in the midst of continued market weakness, it shows that the sellers have finished selling. Accordingly a retracement to the 200 day moving average would be a first target.

One thought on “The Maddening Crowd”