In the last commentary, we discussed technical tools to determine when downside momentum may have stopped and whether it would be safe to re-enter markets from the long side. To reiterate, technical tools give traders a framework for risk, but they are  not fortune telling devices.  Acting on logical evidence is a skill that has to be learned and constantly adhered to in order to have any consistent success in trading.  In today’s discussion we explore the circumstances under which the environment is not conducive to buying despite a sharp price decline.

The most important consideration is always trend.  Trends, once established take a while to change.  The most popular measure of trends are moving averages, specifically the 200 period moving average which is the indicator most used in investing. The reason that 200 days is the  popular indicator is because it represents the number of trading days in a year and thusly,  the line is a good gauge of the year’s trend.

In our previous comments, we’ve noted that during very strong trending moves in an issue, any sharp decline into those up-trending averages can be buying opportunities.  This can be even more compelling when prices spike through the moving average such as we’ve seen during the recent market panic.   There is often a likelihood of a ‘mean regression’ trade during which prices revert back towards the moving average.

But there are cases when this is not a good tactic.  In the examples below, we observe charts that show prices moving substantially below the 200 day moving average but they are clearly not high probability buying candidates.  Looking at the chart for UPS, we can see that the long term trend had in fact been declining over the past while even as the overall stock markets were climbing.  So on a trend and relative strength basis, UPS has not been an optimal trade.  Even as the overall market has bounced back, the downside pressure on UPS is so strong that it has barely budged from the lows made a few days ago.  Although the last quarter of 2019 showed UPS trading above the 200 day, clearly the curve had turned flat to down by late January.  A piercing through this trend line in late January was a strong cue that the trend had turned.  While a regression trade is likely, it will be pushing up against strong headwinds and accordingly, we would avoid this issue. 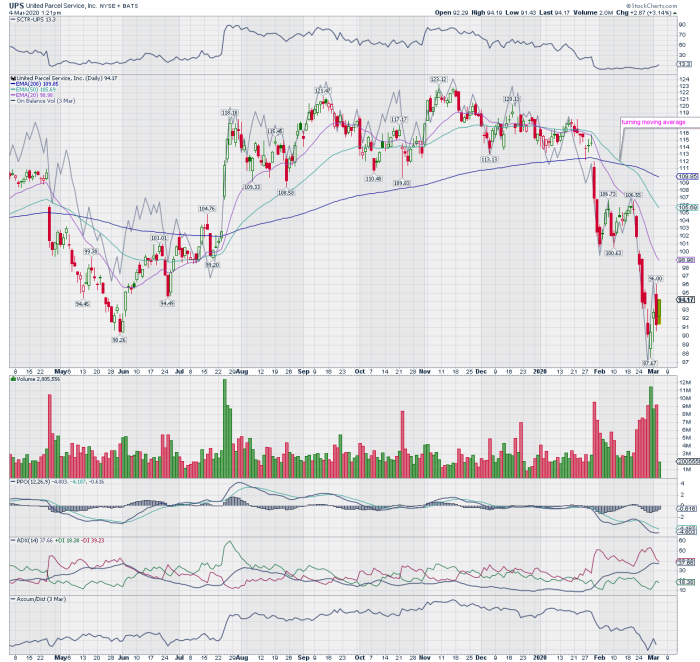 One of the more interesting sectors showing some on-going weakness are the financials.  Using the XLF etf as a proxy we observe that the longer term  moving averages are inflecting after the enormous sell off.  The longer that prices stay at their present levels, the more likely that the long term moving average will turn decisively down.  If this happens, any bottom picks in this group will be dangerous since the trend will be against you.

As you’d expect, individual issues such as GS, JPM, MS among others all show similar patterns of relative weakness despite the rally in other areas of the stock market.  We know interest rates have been pushed down to 1% and this background confirms that banks will have a tougher time going forward.  To be sure, prices of such issues have fallen to areas of previous long term support, but I’m expecting that upticks will be met by sellers.  The trend has gone from up to flat at best and I think that better trades can be found in stronger relative strength sectors.