Following up on our discussion on looking for bottoming action, we are going to look at one simple indicator, or in this case, chart pattern to gain insight into a possible bottom for a stock after a sharp sell off.

To be clear, there are a host of other factors to consider besides this one chart formation, but the average person can look at a chart and determine whether this condition exists with relative ease.  They can then go on to apply other confirming analytics to assess the trade. The chart pattern I refer to is called a doji in candlestick parlance.  This can take many forms and there are specific variations of this pattern such as hammer and inverted hammer,  but the basic premise is this:  Prices will open and close at virtually the same price despite a trading session in which prices fluctuated both higher and lower intraday.   The resulting bar will resemble a cross. This tells you that bulls and bears are at an impasse, waiting to determine which way prices will ultimately go.

In a market where prices have been steadily falling, or especially if the selling has been violent, this will often signal the end of peak downside momentum.  In other words, it hints that the people who want to sell have sold and thus only possible buyers are left.   While this is not a guarantee of a low being made, the lower extremity of that bar becomes a major turning point for the issue.  If a long position is taken after observing this bar, the stop price is just below the lowest extremity since we will now know that sellers still persist. The risk is therefore defined and can be managed.

If we observe the recent action of American Airlines, AAL, it’s clear that the downtrend had been in place and actually accelerated in a selling panic just a few days ago. 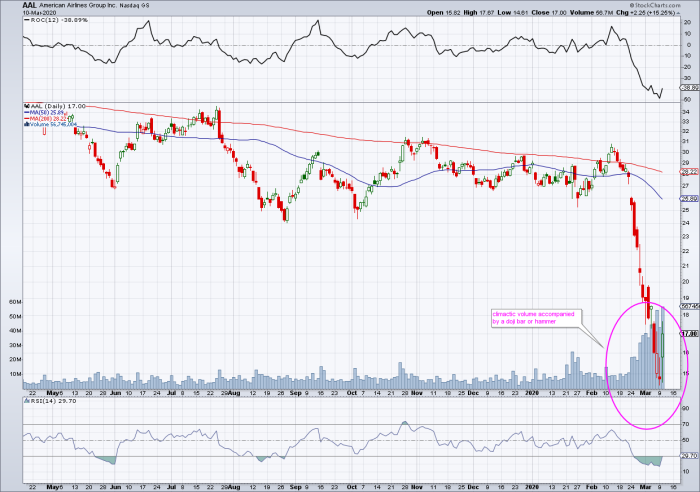 We can observe that a doji pattern exists at the March 9th low and prices did move up subsequent to this bar being formed. To make this trade more compelling, we can observe that volume was many times the norm indicating capitulation on the part of owners who just gave up.  This combination of a sharp selloff, with a multiple sigma move from the moving averages combined with capitulatory volume and a doji pattern creates a very compelling risk reward long trade.  We don’t know if this is THE bottom, but we know the risk can be defined at the recent low.

Keen observers will note that AAL is still in a sharp downtrend and will likely encounter resistance as it advances.  This is a tactical trade to take advantage of the panic that happens from time to time and not a trend trade.  This is a counterstrike.  Finding such an issue that has sold off while still in an up-trending moving average environment is a better long term bet.  This was meant to illustrate that there are objective ways to determine the end of a down move, especially one that happens in a short time.  Traders should never buy something just because it looks cheap, that is just guessing. Let the market tell you when an inflection point is likely and thus a better risk management strategy can be implemented.