In a previous article, we discussed the possible scenarios for market direction once peak volatility passed.  Once bottoming bars were established by the doji shaped candles (labelled climax low on the chart below), the risk reward parameters are established and projections can be made.

With specific reference to the Dow Jones index, the first fibonacci projection of resistance was expected at the 22,540 level.  Accordingly, the peak of this rally thus far was 22,600.  Interestingly, the S&P is also pausing at its respective 38% retracement level as well.  Only the tech heavy Nasdaq proxy of the QQQ‘s have been able to penetrate its 38% level.

The chart below illustrates the next possible set of scenarios now that the first retracement levels have been attained. 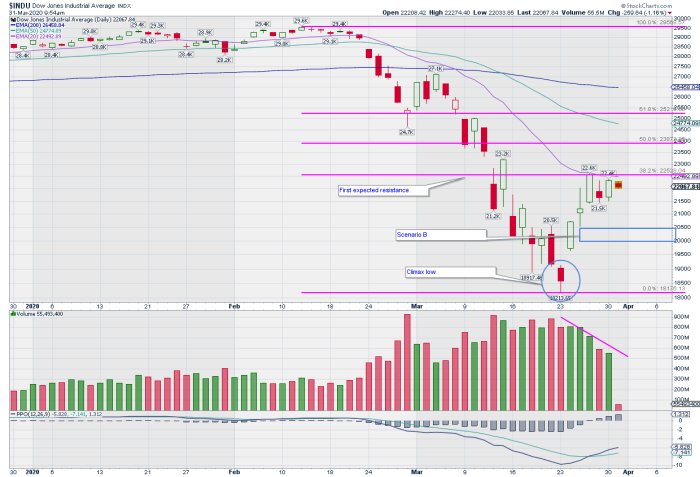 If the Dow is unable to push through this supply area to advance to the next area of resistance at 50%, then I expect a retracement back down to the area labeled Scenario B.  Elliot wave proponents will consider this a flat wave 4 correction and thus a sideways trading pattern is expected.  This view is somewhat bearish, implying a test and penetration of recent lows.   Giving credence to this view is the volume pattern which shows a decline over this past week of rally.

Tactically, traders would use this present area as an area to be defensive if holding longs and to re-engage in the anticipated scenarios of either a breakout or retracement.

It’s important to note that the Dow is not the market, only a sample of 30 major stocks.  In fact, further analysis will show that many sectors are showing strong relative strength even as the overall market teeters.  These include the technology and chip sectors, as well as pharmaceuticals.  Those are the high relative strength sectors which will again lead on the next rally and expected to hold up relatively well in case of further market declines.

As always, price movements do not square up with actuarial calculations, but rather the collective view of the fortunes of companies going forward.  We can see that confidence is being expressed in the strong relative strength sectors while the business fortunes of lagging stocks is less clear. The impact of the global lockdown will most certainly have adverse impact on some companies and the price discounts reflect that.  A key thing to consider is that if news continues to be “bad” and prices do not go lower, then it’s likely a more meaningful bottom has been reached.

A more likely possibility is that the worldwide terror surrounding the viral pandemic  has been overdone and markets will closely compare projected mortality statistics to actual statistics.  While damage done to many businesses and stocks are real, the reduction of the fear component will translate into higher prices if these estimates diverge.