Beyond the obvious actions of price and volume, there are also measures of the internal state of the markets that give clues as to long term health and potential trend inflections.

Breadth, or the measure of advancing issues versus declining issues can reveal whether a market’s present trend is flagging and about to either pause or turn in the other direction.  In general, the a/d line should mirror the trend of the markets:  thus when there is conspicuous divergence in the two lines, it portends a change in momentum.  Attached are the charts depicting the advance/decline lines for the Dow Jones, the S&P and the Nasdaq indices superimposed on the indices indicated by the shaded areas. 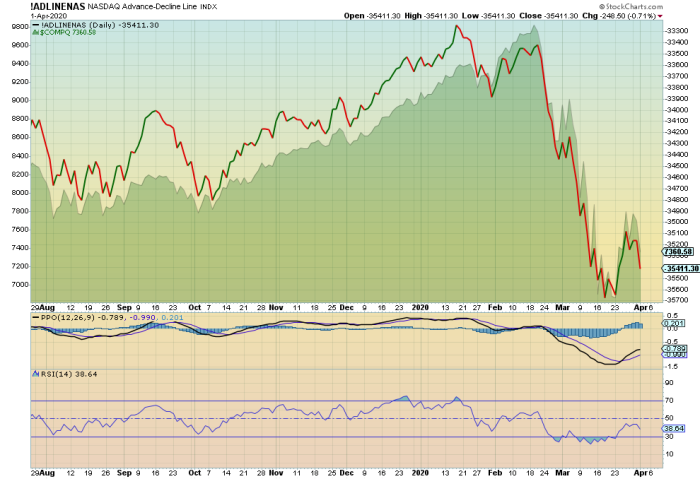 Some interesting observations to note: In all 3 cases, the a/d line of the respective markets were pretty much in sync leading up to the peak created in mid February.  The Nasdaq lines show some divergence, but that has much to do with the constituency of that index which we won’t discuss in detail here.  The harmony of the lines tells us that there weren’t any obvious disconnect signals given by any of the markets.  This tells us that fundamentals were strong and stocks were not in a valuation froth.

When the markets suddenly and violently sold off, it occurred in the wake of news that no one could have predicted; literally a bolt out of the blue.  While the RSI indicator did show some waning in the Dow and the S&P, it wasn’t alarming and it was only the Nasdaq that hinted of any weakness to come, but certainly not the magnitude.

As the markets have declined, the a/d lines have again been in relative sync with their respective indices.  This is noteworthy because in classic selling scenarios, the a/d line will diverge from peaking prices giving off clues of weakness.  In the case of searching for a bottom, we look for the opposite ie: for declining prices but with the a/d line refusing to follow.  Thus far, we don’t see this which leads me to expect some continued weakness until such signs emerge.

In a previous piece we discussed the possibility of a broadening formation which would bring the indices to a new nominal low or a test of the old one.  Should this unfold, we will keenly gauge the status of the a/d line for additional evidence that a final low has been made for the main indices.