It’s been almost 4 months since the initial shock to the stock markets ostensibly caused by the panicked entreaties of health officials.  A number of factors contributed to the massive selloff which ensued over the following months based on the sudden introduction of unknowns.  The lack of substantiated facts was one factor but also the concentration of investment funds among managers also contributed to the precipitous selloff.  That is to say, selling begets selling, just the opposite of buying stampedes.  Professional managers all have predetermined risk parameters for their positions and once downside targets are reached, they are obliged to execute; which can feed a selling frenzy beyond a ‘normal’ correction.

While in hindsight, history is always seen with clarity, in the midst of the action, the best course of action is usually unclear.  Who can be blamed for being confused over the hysterical messages being broadcast by the news outlets, who themselves have little real knowledge of events?

In the investment space, there are in fact tools that are used to help navigate through periods of market uncertainty; not with a map so much as with a compass.  It’s a flip of the coin as to where prices will move over a short time, but over the longer horizon, the phenomenon of trend is the single most important market fundamental.

There are large economic and social forces which serve to create the background environment for investments.  These forces are slow to build but once they get moving, they don’t turn without substantial changes to the underlying factors.  In addition, stock prices are discounting mechanisms, which means they look out beyond what is currently happening and prices respond in anticipation.   Therefore, to observe trends is the key to successfully allocating assets.

The veracity of this statement is hardly original, but the events of the last few months has proved again its timeless wisdom.   I remarked on the February 26th posting thusly:

“…To be clear, this settling off of prices may continue for a yet unknown period of time.  We should also add that the longer that prices stay on their present down trajectory, the more likely that overall trends may change.  But it has been my experience that when trends have been on a broad, strong path, that any corrections back to the moving averages, especially sharp ones, are usually buying opportunities.  Historically, such setbacks have proved to be regressions to the mean…”

One could say that it’s luck that most of the markets did indeed turn back higher over the months and some indices have actually reached new highs.  But it’s not entirely luck.  The timeless force of trends has proven again to be in effect.

Here is a chart of the QQQ, a market proxy for the Nasdaq index.  Despite the drastic decline from the highs made in February, the selloff came against a background trend of strongly advancing prices.  One could argue that a correction was imminent due to the distance from the popular moving averages, but the extreme selloff could not have been predicted.  What is observable is that there was a strong undercurrent of strength up until the peak. 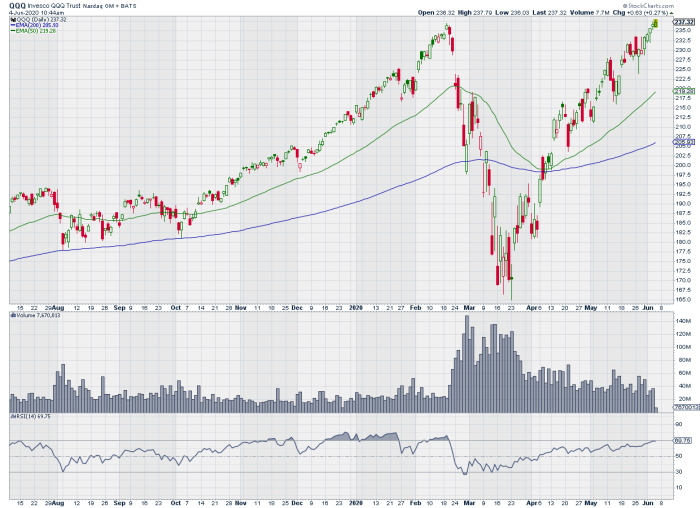 It was by no means certain when prices would recover once the longer term averages were pierced, but as noted, historically prices that move sharply against long term up trends tend to be buying opportunities.  The task at hand was to look for clues for that turn, which we’ve explored over the past few months.

The market recovery has been uneven with many businesses failing to survive the new environment and others are delayed in their responses.  It is not a surprise that strong market performers before the crash were also the fastest in recovering.  MSFT, AAPL, JNJ, HD and MCD among the names we have mentioned.

Going forward, the task is to monitor those issues with strong relative performance as the market will likely go through a rotation of strength.  Strong performers will pause as laggards may begin to show relative strength.

All of this is happening amidst a background of civil unrest and of course the implication of uncertain times ahead.  Nobody knows how it will all settle, but the market is telling us that it’s not as dire as the news makes it out to be.  We’ve explored in real time some tactics to be used to navigate the markets during this period, but the important aspect of trend should underpin all investments.

At some point, the background will change and we will be alert to those changes with some simple technical tools.  Meanwhile, it makes sense to be on the right side of trend.